When Father Leroy Schik was in high school, he ran track. Running for him came fairly easy but after a while, mud began to build up on the soles of his shoes and it slowed him down.

“That’s how I fell in love with the sacrament of reconciliation,” Father Leroy said. “It’s the same concept with our spiritual lives. We can go along well for a while, but eventually our sins weigh us down.”

So when the statewide order to stay at home went into effect just before Easter, Father Leroy tried desperately to think of a way he could still offer the sacrament that he loves so much and feels is so important to his parishioners.

“One of my parishioners suggested I use my fish house,” Father Leroy said.

After a hail sale last August, Father Leroy purchased a slightly damaged fish house from Ben’s Bait and Ice Castles in Battle Lake. He spent some time thinking how it might function as a confessional. He and Deacon Craig Stich, who coincidentally owns Ben’s Bait with his father and his two sons, tested the concept to make sure it would protect the confidentiality of the sacrament.

“Obviously, that was our primary concern,” Father Leroy said.

The two experimented with different options and found that when Father Leroy was inside the fish house and the penitent was in his or her vehicle, the sound did not carry. Another parishioner sewed a purple curtain, or veil, for the window to make it feel more sacramental.

In the meantime, Deacon Craig shared a picture of the fish house on the Ben’s Bait Facebook page, which he said “went viral.”

On Good Friday, after livestreaming the service, Father Leroy donned his alb and purple confessional stole, and offered confessions in his fish house in the parking lot of Our Lady of the Lake Church in Battle Lake. For three solid hours, cars pulled up at least eight feet apart and waited their turn for the sacrament.

Deacon Craig, who helped direct traffic, said some people drove for hours for the opportunity — some for the novelty of a “fish house confession,” but all hungry for the sacrament they missed so much.

“This was a godsend, it was meant to be,” said Deacon Craig. “Father Leroy’s gift is in the confessional, that’s for sure. And you can tell how important it was to him to be able to offer this to the people.” 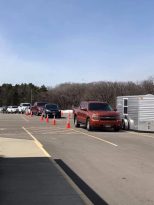 Deacon Craig said it was a testimony to anyone who drives by to see the long line of cars. Families pulled up in their vehicles, stopped at the stop sign, and waited while each of the parents and children had a chance to go up to the screened-in window.

“I’d say he caught some huge fish — people who hadn’t been [to confession] for many years,” Deacon Craig said. “It was pretty amazing to see the Holy Spirit at work.”

Father Leroy offered a second opportunity for the drive-up confessions on Divine Mercy Sunday. Again, they lined up for nearly three hours. While in line, the Divine Mercy Chaplet could be heard playing on a speaker.

“I have always had such a high regard for this sacrament,” Father Leroy said. “I go regularly myself and I could tell people were really longing for it. So many of them thanked me for the opportunity. This time of year especially, people are seeking forgiveness. And at this time with the virus, it is even more important.”

Are you still having fish house confession, if so what are the time? Thank you!