Although Deacon Carl Nord was raised Catholic, a negative experience in the Church as a young adult left him feeling excluded. He turned away from the Church and the community. He even doubted whether God truly existed.

“I basically was an atheist,” Deacon Nord said.

In 1991, his wife, Nancy, was going through a difficult time after her brother died by suicide. Some friends encouraged her to attend a Koinonia retreat.

“Nancy had some friends who urged her to go because she needed some healing,” Deacon Nord said. “They had found similar healing at Koinonia.”

Koinonia, pronounced ‘coy-nuh-knee-uh,’ means “Christian community” and is derived from a letter of St. Paul describing the early Church. Koinonia retreats are a community experience in Christian living designed especially for adults. It is a Catholic retreat program sponsored by the St. Cloud Diocese and open to people of all faiths.

Nancy’s experience at Koinonia was so profound that the first thing she said when she saw her husband was, “You have to go on this retreat.”

Deacon Nord admits he was more than a little skeptical about going on the retreat. He didn’t want to go. But he decided to attend for his wife’s sake and planned to just “hide out” in a corner. The first night he was there, he already felt the Holy Spirit working in him.

“At first, it was really difficult. Conversion itself is hard. But by the end of the second night, after seeing people who actually believed what they were talking about and professed it, their faith was so apparent, it began to change me,” Deacon Nord said. “By Sunday morning I was ready to have that spiritual emptying, the dying to ‘self.’”

“And the other thing was that they included me without question, and for me that was a big thing,” he added.

After the retreat, Deacon Nord shared his experience with a friend.

“My friend said, ‘Well, they scared you into becoming Catholic again.’ And I said, ‘No, they loved me back into it.’” 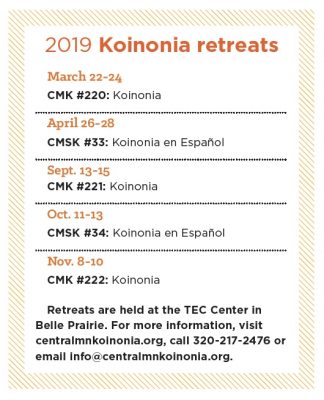 After becoming a deacon, he served as spiritual director on some of the weekends. Now, he serves on the board of directors and still participates as an annual retreatant.

“I continue to do weekends at least once a year now because it helps regenerate my spirituality. When I came in, I was an atheist. I didn’t have faith in anything. I didn’t believe in anything. But like I said, it was the inclusion. For me, that was an important thing,” he said.

According to its website, Koinonia has a two-fold purpose: to provide a time and a place for adult Christians to experience the reality of Christian community, fellowship and sharing; and to provide a depth of faith-sharing support that allows and challenges inner renewal for each participant at his or her own level.

The theme of the Koinonia weekend is the Paschal Mystery, the death and resurrection of Jesus. The first day includes the celebration of Lent. There is a communal penance service and the opportunity for individual confession through the sacrament of reconciliation. The second day focuses on Easter and the implications that the Resurrection brings to the life of each Christian.

Pentecost is celebrated on the third day by examining individuals’ roles in the Church.

The Koinonia retreat format also includes the mission of renewal.

Deacon Nord added that many people come to the weekend as skeptics, but he said it’s rare that anyone leaves without a change of heart.

“There have been people who have experienced changes in their relationships with their spouses. We have a lot of people who come on these weekends who are suffering from addictions of one kind or another. People come with all kinds of brokenness,” he said.

“The object of the weekend is to have an experience of Jesus Christ and to draw closer to him,” he said. “And I would say that most people accomplish that.”

“There have been people who have experienced changes in their relationships with their spouses.
This statement was the opposite for me. I wasn’t interested in going when my husband went to his Koinonia retreat. He came home saying he coudn’t tell me things that they ask the people at the retreat not to tell. I found this strange. Why would a spiritual retreat ask a husband to keep secrets from their spouse. Needless to say this did change our relationship but in a negative way.

Before God brought me to Koinonia, I had been badly hurt by people I had been on another Christian retreat with. Thankfully, my faith was strong enough then to know it was the evil one inside those people that caused this pain to happen & not the Catholic faith. I prayed about where God had for me to grow in and He brought me to Koinonia! My first weekend, I was the youngest person there, but I was treated as an equal adult, with equal opinions and life experiences. I knew this was where God wants me to be! My closest friends today are people I’ve met on Koinonia, as I have been back to serve on countless weekends since my first, 8 years ago. SO THANKFUL FOR THIS PROGRAM!!!

As someone who has come to this Koinonia retreat, it gave me a renewed spirit which I hadn’t taken care of for years previously, and it prepared me to depend on the one Being when tragedy came into our family, and I’ve learned to always seek out God, because He gives me what I need to live day to day. I wouldn’t have it any other way.