Neal Anderson is a new seminarian on the path to priesthood for the Diocese of St. Cloud. A native of Albany and parishioner of Seven Dolors Church, the 24-year-old is currently in his “propaedeutic year,” a new formation year for men discerning the priesthood at St. Paul Seminary in St. Paul, Minnesota.

The propaedeutic year, “not the propaganda year, not the proportion year” as Neal joked, is a preliminary, prerequisite formation year for men discerning the priesthood. A transition year of sorts, it is an intentional time of discernment, prayer, community and growth for men before they enter major seminary studies.

The word “propaedeutic” means “a time of preparation,” according to an article on the website of St. Paul Seminary, one of the first seminaries in North America to institute the special year.

The U.S. Conference of Catholic Bishops added it to its Program of Priestly Formation for U.S. dioceses and religious orders after Pope Francis called for an extra year of formation for seminarians.

It is a year to help “men that are coming from a culture of maybe not God to transform into a culture of God,” Neal said.

“We’re born sons of God, we’re born children of God, but we lived in a culture that wasn’t feeding that identity,” Neal said. “So now we’re really focusing on how we can be children of God, focusing on our prayer life. We’re reading a lot of spiritual books, and we’re just living in brotherhood and encouraging each other to go from boys to men of virtue.”

There are 16 men in the program this year. They are a part of the seminary but live separate in a convent-turned house a few blocks down the road by St. Mark Church. The men participate in a media and technology fast, only having access to technology to connect with family and friends on Saturdays. They also meet with a psychologist twice a week to focus on personal growth, maturity and related topics and engage in weekly service work in the community.

Neal’s typical day as a propaedeutic-year seminarian begins with a Holy Hour at 6:30 a.m., followed by breakfast and then classes. He said classes are not graded and are taught by professors at the seminary.

After classes, the men attend Mass together before enjoying free afternoons. Neal said the purpose of not having anything scheduled is to cultivate silence.

His day finishes with evening prayer and dinner, before enjoying “chill” time before bed.

Neal said his journey to the seminary began even before he was born. Two tragic deaths in his family — his uncle and his cousin, both of whom died when they were young — helped sow seeds of faith in his family. 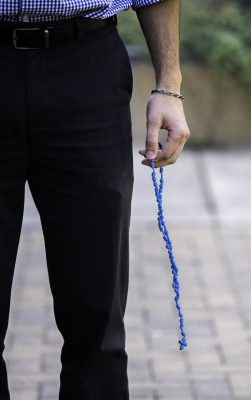 “My uncle died when he was 13 from a heart attack, and my grandma and grandpa just responded with faith, hope and love to that,” Neal said. “It’s crazy how where death is, it puts a fork in the road. Do you respond with faith, or do you respond with despair, or sadness or anger? Those deaths brought a lot of seeds of faith to our family and to myself.”

Neal also credits an experience at SEEK, a conference for college students run by the college ministry program FOCUS, for sparking a call to priesthood.

“Mass started, and all of a sudden 500 priests are walking down the aisle to celebrate. … And so imagine 500 soldiers in this battle for Jesus Christ walking down that alley and you’re like wow,” Neal said. “So along with the seeds of faith that were born in my family from the deaths to just being inspired by so many priests who are in the battlefield… I’m like, I want to discern that, I want to see if that’s where I’m called.”

Neal grew up in Albany, the son of Steven and Lisa Anderson. One of four children, he attended Holy Family School and then Albany High School before graduating from St. John’s University in Collegeville, where he played basketball, in 2020. After college, he was a FOCUS missionary at the University of Minnesota-Duluth alongside Father Mike Schmitz, who serves as the chaplain for UMD’s Newman Center.

Neal said it was his encounter with FOCUS in college that helped him come to know Jesus personally.

“FOCUS really brought me in … and just formed me in the faith. That’s where I encountered Jesus Christ in a very real way. … I felt like I had this calling to discern priesthood,” he said.

He said he discerned between entering seminary right away after college or becoming a FOCUS missionary himself, to do “college ministry just as someone ministered to me.”

In the end, he decided to be a FOCUS missionary for two years. Now, Neal is on his path to priesthood.

After this year, Neal and the other men in the propaedeutic year will move to the St. Paul Seminary and study philosophy for two years, though for Neal, it will only be one year thanks to his philosophy studies at St. John’s. After that, they will spend another four years studying theology before being ordained.

View all posts by Gianna Bonello