WHEN THOMAS NEWTON WAS A CHILD, he was sick much of the time. Countless visits to the doctor for strep throat, severe allergies and other ailments had him wondering how anyone would want to be a doctor “being around all those sick people all the time,” his younger self recalled. 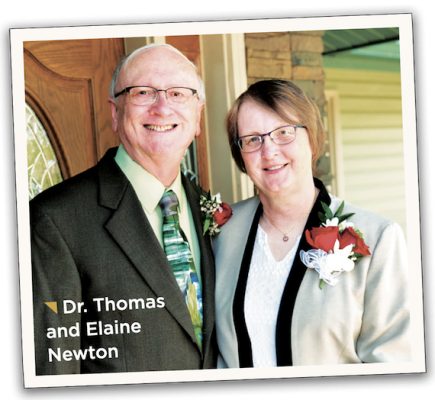 Sometime around the fifth grade, Newton took a family road trip to Winnipeg, Canada. The hours in the car were long, and he happened across a book written by Dr. Thomas Dooley, a medical missionary to Vietnam and Laos.

“Something happened when I read that book,” Newton said. “I immediately knew I was going to be a doctor. It was a sudden transformation. It had to have been the Holy Spirit. From that minute on, everything I did was in preparation for becoming a physician.”

After attending grade school at Maternity of Mary and then Cretin High School in St. Paul, Newton attended the College of St. Thomas (now the University of St. Thomas), and then went on to Loyola University in Chicago for medical school.

The decision to be a doctor was set, but he was still unsure which field to practice in. Inspired by the TV show “Marcus Welby, M.D.” he opted for family practice.

“I just loved the way he took care of his patients,” Newton said. “I could see medicine as an extension of my religion and how I could serve.”

After completing medical school, Newton went to Saginaw, Michigan, for his residency. “It was the last choice on my list,” he said. “But God had a plan for that, too. That’s where I met my beautiful wife, Elaine.”

The Newtons moved to St. Joseph in 1978 shortly after they were married. The couple raised three children there — two sons and a daughter — and Newton practiced family medicine there for 38 years until his retirement in 2016.

Newton has been named the 2020 Humanae Vitae Award recipient for the Diocese of St. Cloud. This honor is given annually to a person who has exhibited extraordinary courage in promoting the teachings of the encyclical “Humanae Vitae.” The document, written by St. Paul VI and released in 1968, explains the Catholic Church’s teaching about human life, married love, responsible parenthood and natural family planning.

The encyclical was published during Newton’s freshman year of college.

“It just made perfect sense to cooperate with physiology and with nature rather than trying to subvert it,” he said. “Every treatment we do in medicine is to restore or balance or assist your natural physiology. If something goes haywire, you prescribe a medication to fix it to get it back to normal. As far as I know, oral contraception is the only medication that opposes your natural physiology, it blocks it. It doesn’t make sense. You can only oppose Mother Nature so long before something happens.”

While in college, there was a shortage of physicians.

“One of the first principles we learned in our medical training is ‘primum non nocere,’ which means ‘first, do no harm.’ Prescribing medication or treatments that can have potentially horrendous side effects is doing harm. I decided I’d be one of those physicians who would support Humanae Vitae,” he recalled.

Making the decision was easy, but living it out had many challenges.

“Many patients left the practice because they didn’t understand the teaching. But most of the criticism I received was from the medical profession. Even to this day, many physicians and people don’t support it,” Newton said.

Despite adversity, many patients did support his work.

“In family practice, you know all your patients, you know their families,” he said. “It’s almost like you are an ex-officio member of the family, observing their life from newborn through adulthood. You don’t just see them in the doctor’s office. You see them at the grocery store, at church, they are part of your community. It really reinforces that we are all one family under God.”

Throughout his life, his faith has been at the forefront of all he does, and he credits the Benedictine sisters who taught him as a child.

“’Treat every person as Christ. That’s what they taught us. That aspect of my faith really influenced my work. And my work influenced my faith — to see my patients’ faith as they went through crises really tested their faith and tested mine as well. My patients helped me as much spiritually as I was able to help them physically.”

Humbled by the award, Newton said there are so many others who are more deserving.

“I’m honored that I was thought of as a recipient,” he said. “Maybe people did notice what I was doing. If there’s one thing I hope I have shown people it’s that you can be a physician and be faithful to this teaching. It can be done. And to couples who are wavering on their own methods of family planning, it can be done. Listen to your heart and be open to the movement of the Holy Spirit in your life.”

A Mass with Bishop Donald Kettler will honor Newton at 7 p.m., Friday, July 24, at St. Mary’s Cathedral in St. Cloud. All are welcome.