Many of us are looking forward to traveling again after staying home due to COVID-19 restrictions for the past year. For those looking for a road trip or other excursion ideas, a new travel guide, “Monuments, Marvels, and Miracles” by Marion Amberg, a Morris, Minnesota native, offers Catholics more than 500 holy sites to visit across the United States.

“Monuments, Marvels, and Miracles” is a substantial book and is divided into seven geographic regions; each state, along with the District of Columbia, has its own chapter. It includes many color photographs, some Catholic trivia and a “Plan Your Visit” segment that lists website information, phone numbers and addresses for each attraction. Maps of each state show the locations of the sites. Every chapter ends with “Finding Faith,” which tells of something unique and interesting regarding the Catholic faith in that state.

For those interested in taking a shorter road trip, the book’s Midwest section offers sites in 13 states, including North and South Dakota, Kansas, Missouri, as far southeast as Ohio and Kentucky, and, of course, Minnesota. Our state’s 10 featured Catholic attractions include three from the Diocese of St. Cloud: the National Shrine of St. Odilia at Holy Cross Church in Onamia, the St. John’s Abbey Church in Collegeville, and Assumption Chapel, also known as the Grasshopper Chapel, in Cold Spring. 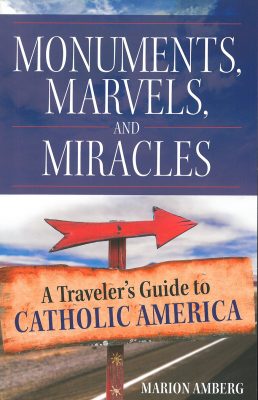 If the grasshopper plague is of interest, there is a second place to visit, this one in Jefferson, South Dakota, close to Sioux Falls. In 1876, during the second grasshopper invasion, Catholics and Protestants formed an 11-mile procession, praying and erecting numerous tall wooden crosses in hopes that the pests would flee the area, and they miraculously did. Three of the grasshopper crosses still stand. Sioux Falls also has the Cathedral of St. Joseph, a Renaissance Revival structure built in 1916.

Just across the Minnesota border are two Catholic places of interest in La Crosse, Wisconsin, and one each in Fargo and Grand Forks, North Dakota. In northern Iowa, the Shrine of the Grotto of the Redemption in West Bend and St. Anthony of Padua Chapel at Festina are featured.

“Monuments, Marvels, and Miracles” includes information about the architecture, religious history and art of these places. An index lists the architects, artisans and holy people mentioned in the book.

In an email interview, Amberg expressed amazement “at the sheer number of holy men and women in America, either canonized or on their way to sainthood. And the stories they tell … from the Good Thief in Kansas to the Fastest Nun in the West!” Discovering the fascinating tidbits of many of the attractions was a definite highlight of her research.

Amberg, an award-winning book author and freelance journalist, grew up with her 11 siblings on a family farm in rural Morris and currently lives in New Mexico. She was born and baptized in Wyoming but soon after moved with her family to the Morris area. She made her first Communion and was confirmed at Assumption Church and attended St. Mary School in Morris. She considers Assumption Church her “ground-zero of faith,” stating that she “essentially grew up in the faith” at Assumption Church.

“Monuments, Marvels, and Miracles” is a great source of information for those looking to do some traveling, but also for those just curious about other parts of the country. The book is available in bookstores everywhere, including the College of St. Benedict and St. John’s University Bookstores and the St. Cloud Book Shop.

Ann Jonas is the general book buyer at the St. John’s University/College of St. Benedict Bookstores.

Collegeville • St. John the Baptist Parish hosts rummage sale from 7 a.m. to 7 p.m. in the parish center on Fruit Farm Road, west of […]

Collegeville • St. John the Baptist Parish hosts rummage sale from 7 to 11 a.m. in the parish center on Fruit Farm Road, west of St. […]

Eagan • Retrouvaille weekend experience for couples in troubled marriages starts at 7 p.m. this evening and ends at 4 p.m. Sunday, Oct. 2, at Dakota […]

St. Cloud • The 40 Days for Life Fall Campaign opening rally is today from 10 a.m. to noon starting at the vigil site (Planned Parenthood, […]

St. Joseph • Spirituality Center at St. Benedict’s Monastery hosts “Writing to Change the World, One Writer and One Millimeter at a Time,” led by Benedictine […]

Sauk Rapids • Mass of Hope and Healing for couples who have lost a child through miscarriage, SIDS, illness, accident or abortion, and those experiencing infertility, […]

Opole • Our Lady of Mount Carmel Parish hosts family fun night from 6 to 9:30 p.m. at the church. Event includes games for all ages, […]