The Pan-Amazonian Church Network, REPAM, announced Oct. 15 that Cardinal Barreto would replace Brazilian Cardinal Claudio Hummes, who has led the network since its founding six years ago.

Cardinal Barreto, 76, takes the helm at a critical time for REPAM as it looks for ways to respond to increased pressures on Amazon communities while working through internal organizational changes. Those pressures have been further complicated by the COVID-19 pandemic.

Cardinal Barreto told Catholic News Service that indigenous communities in the Amazon continued to suffer from encroachment even as they were dealing with COVID-19.

“While the pandemic forced communities to lock down, large-scale investors did not rest a single day in deforesting the Amazon. The pandemic further exposed the contradictions we have been living through in the Amazon,” Cardinal Barreto said in a telephone interview Oct. 16.

He said the church’s network would continue to work to defend indigenous communities and the Amazon from an “economic and culture invasion” that has created widespread harm.

The Amazon and surrounding plains have been hard hit this year by a wave of fires, with more than 74,000 fires registered in Brazil in the first eight months of this year. Several other countries in REPAM also have registered more than 10,000 fires this year.

Cardinal Barreto said that while some fires have natural causes, many are provoked “to expand agriculture without interest in life. They are only interested in profits.”

REPAM also needs to work through internal changes, what Cardinal Hummes called a “constant exercise in listening and adapting” in the statement announcing his successor’s appointment. The network elected new leadership in September and is moving its headquarters from Ecuador to Manaus, in the Brazilian Amazon.

Cardinals Barreto and Hummes, the retired archbishop of Sao Paulo, will continue working together, now each heading the church’s two organizations focused on the Amazon. Cardinal Hummes, 86, left REPAM to head the Vatican’s new Ecclesial Conference of the Amazon, CEAMA, founded in June.

Cardinal Barreto said finding the best way to work together will be critical.

“The challenge today is how best to interface the CEAMA, which was created to put into practice the proposals from the Amazon synod,” held at the Vatican in 2019, said Cardinal Barreto. 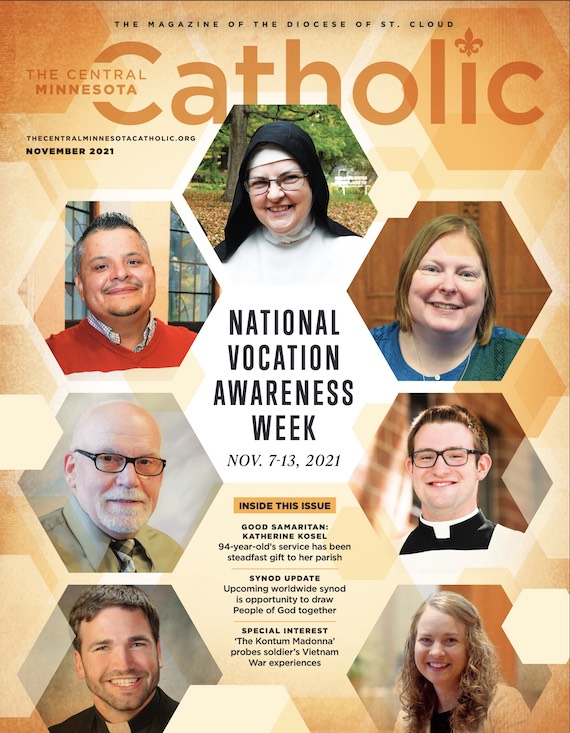 Our Blog: From the Heart

This gold pectoral cross belonged to Bishop Joseph Busch, who served the diocese from 1915 to 1953. The cross was worn by Bishop Jerome Hanus (now Archbishop Emeritus of the Diocese of Dubuque) during his ordination as bishop on Aug. 24, 1987.⁠
Wat

"The synod is meant to help people be their best self, to help us be a community better together, to help us listen to one another." #synod #synod2023 #listeningchurch

This inkwell was used by Bishop James Trobec, the third bishop of the Diocese of St. Cloud. He was ordained a bishop in 1897 and served the diocese until 1914 when he retired and moved to St. Stephen. He died on Dec. 15, 1921.⁠
Watch every Thursday for a new artifact from the archives of the Diocese of St. Cloud. Share cool artifacts from your parish with #treasuresofstcloud #catholic #insidethearchives #diocesanarchives ⁠#pastbishops