I am writing this one month before Groundhog Day when winter storms are crisscrossing the land, the days are short and nights are long. By Feb. 2 most people in the northern hemisphere begin to long for spring and summer. As one winter day turns into another, any distinctions between them blur. Especially in this winter marked by almost a year of hunkering down due to COVID-19, we look to groundhog for a sign of hope.

Celebrating Groundhog Day (since 1840 in Pennsylvania) seems to derive from a Pennsylvania Dutch scientifically unfounded belief that if the groundhog emerges from hibernating in its burrow on Feb. 2, and it happens to be a clear day, it will see its shadow and return to sleep for another six weeks of winter. If it is cloudy and doesn’t see its shadow, then, “Hurray!” because there will be an early spring (maybe).

The 1993 film “Groundhog Day” comedically illustrates Groundhog Day’s place in our culture as an implausible yet hopeful seasonal indicator. It’s a stumbling block and opportunity for the film’s protagonist, Phil, played by Bill Murray, who finds no joy in this yearly event. For us, as the days of this pandemic are largely indistinguishable and called Blursday by many people I know, Groundhog Day, the day and the film, can be both a teachable moment and moment of grace.

Bill Murray’s Phil is the hapless, cynical and self-centered Pittsburg television weatherman who shares his name with a famous groundhog, the glorified rodent Punxsutawney Phil. Andie McDowell is Rita, his new and unamused producer, and Chris Elliott is Larry, the long-suffering cameraman. For the fifth year in a row, Phil is assigned to cover the emergence of Punxsutawney Phil to look for his shadow (he doesn’t see it).

Phil doesn’t want to stay for the festival afterward and, despite the blizzard that is moving in, the crew hits the road. The highway gets so bad they have to return to Punxsutawney. Phil is unhappy and snarky but falls into some kind of déjà vu time loop. He relives all the frustrations of Groundhog Day over and over until he learns to reset his attitude and get things right about people. How he treats the homeless man he passes every day is just one area Phil needs to work on.

We can make a meaningful liturgical connection to Groundhog Day right away because Feb. 2, 40 days after Christmas, commemorates the traditional feasts of Candlemas, the Purification of Mary and the Presentation of Jesus in the Temple (which headlines the day in the missal). Mass begins with the blessing of candles and a procession, for Christ is “a light for revelation to the Gentiles and the glory of your people, Israel.” For Christians, Feb. 2 is all about the light of Christ shining in a dreary land and into hearts burrowed into darkness and shadows as we live the uncertainty of the pandemic from one Blursday to the next. 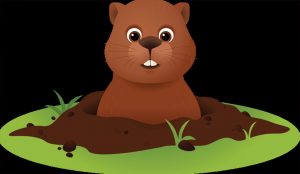 I don’t remember any candles in the film, but the light of God comes in many ways to Phil, warming his heart and enlightening him to take the opportunity to change and grow. Even if the name of God is not present, the reality of God is, as Paulist Father Bud Kaiser used to say. One of my Facebook friends commented about the film, saying it is “an analogy for modern life. Every day is practically a repeat of all the others. How we confront that routine depends on whether or not we break the monotony of hopelessness” as Phil is finally able to do.

Another friend said, “It is reaching out to others that gives our lives the emotional support we need to break out of the routine.” My friend Ellen sees a sacramental dimension to the film and wrote that “reflecting on ‘Groundhog Day’ gives us a chance to better understand and repair those interactions in which we have previously failed.”

But, one might ask, why did God make the lowly groundhog, a furry, sleepy rodent, who seeing its shadow may portend an early spring? On this day, when we celebrate the Light of Christ as his Mother Mary presents him in the Temple, we can find the groundhog’s purpose in the Roman Ritual’s Blessings of Animals: “Blessed are you, O Lord, who through your lowliest creatures never cease to draw us to your love.”

In the end, it is love that motivates weatherman Phil in the movie. Reporting on Punxsutawney Phil year after year became a transforming grace for Phil and, in the process, he and Rita find one another. God created groundhogs as a sign to point us, draw us, to God’s love in the darkness of winter and all the Blursdays this pandemic offers to us as opportunities to love God and one another. And God sent his son, born of the Virgin Mary, out of love for humanity, and on this day reveals him as a saving Light to the Nations.

Sister Rose is a media literacy education specialist and the award-winning film critic for St. Anthony Messenger Magazine and the National Catholic Reporter. She can be found at www.patheos.com/blogs/sisterrosemovies/, on Facebook at SisterRoseGoesToTheMovies, and on Twitter @SrRoseMovies.

Collegeville • St. John the Baptist Parish hosts rummage sale from 7 a.m. to 7 p.m. in the parish center on Fruit Farm Road, west of […]

Collegeville • St. John the Baptist Parish hosts rummage sale from 7 to 11 a.m. in the parish center on Fruit Farm Road, west of St. […]

Eagan • Retrouvaille weekend experience for couples in troubled marriages starts at 7 p.m. this evening and ends at 4 p.m. Sunday, Oct. 2, at Dakota […]

St. Cloud • The 40 Days for Life Fall Campaign opening rally is today from 10 a.m. to noon starting at the vigil site (Planned Parenthood, […]

St. Joseph • Spirituality Center at St. Benedict’s Monastery hosts “Writing to Change the World, One Writer and One Millimeter at a Time,” led by Benedictine […]

Sauk Rapids • Mass of Hope and Healing for couples who have lost a child through miscarriage, SIDS, illness, accident or abortion, and those experiencing infertility, […]

Opole • Our Lady of Mount Carmel Parish hosts family fun night from 6 to 9:30 p.m. at the church. Event includes games for all ages, […]