Ladies and gentlemen, start your engines! Father Aaron Kuhn and friends are off to a strong start as they build a car — a replica of a 1965 Shelby “Cobra”— from the MK4 Roadster kit from Factory Five Racing Inc. Once completed, the car will be raffled off to raise funds and awareness for vocations.

When Kathy Angus hears the thunderous roar of an engine from her home across the street from St. Ann Parish in Wadena, her curiosity often gets the best of her. She occasionally wanders over to “Father’s Garage,” a term coined by Father Aaron Kuhn, who is building a replica of a 1965 Shelby “Cobra” from an MK4 roadster kit in the rectory garage.

“I’m just fascinated by the process,” Angus said. “When they put the steering wheel on, that was so exciting for me. Father has been very good in getting everyone involved. It’s brought people together — not just people from the parish — from the whole community. It draws people together for camaraderie and to use their talents. It’s the whole deal,” she said.

More than a year ago, Father Kuhn spoke with Father Matthew Keller, a priest in the Diocese of Gallup, New Mexico, who started “V8s for Vocations” as a way to offset costs for seminarians studying for the priesthood. Father Keller built a car over a two-year period and raff led it off to raise funds. The idea took off.

Inspired by the concept, Father Kuhn adopted the initiative and drove it a step further — to include women discerning vocations to religious life.

“When people have student debt, especially women, that is an additional consideration when seeking acceptance into a community. How do you fix that gap?” Father Kuhn said.

He talked about the idea with people locally and around the diocese and found there was interest. Tackling most of the initial financial investment himself — somewhere in the ballpark of $50,000 — he ordered a kit and spent weeks planning and prepping. That included revamping the rectory’s garage to insulate it for the cold winter months, securing the proper tools and inviting parishioners to help. He began holding build sessions as soon as the kit arrived in November. 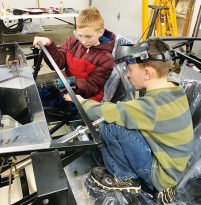 News of the car build spread, and more members of the community brought their skills to the garage. Neighbors and strangers worked side by side unpacking boxes, checking inventories and getting things organized.

David Freyholtz, 11, often can be found helping in Father’s Garage usually with his dad and siblings and sometimes with his cousins, including Hunter Waln, 11.

“When we first started, there was no motor or wheels or anything,” Freyholtz said. “We did a lot of sorting and making sure all the pieces were there.”

What he liked the most he said, was “just being there” and “working on it a lot.”

“We mostly go with my dad, and he really liked taking us. It was kind of like a father-son thing,” he added.

The car kit, along with the engine and transmission, were purchased from Factory Five Racing, Inc.

“It’s their premier model — the flashy splashy one,” Father Kuhn said. “For the gearheads out there, it has a modern space frame, a 2015 third generation Ford Mustang 5.0 L Coyote engine with about 435 horsepower and a five-speed Tremec transmission with about 400 lbs. of torque.”

Ryan Booen, who is a skilled auto repair technician in the area, heard about the car building from a friend.

“I showed up one day, and I’ve been showing up a lot ever since,” Booen said.

Booen, who also enjoys working on cars in his spare time, has acted as a sort of teacher for the group and is one of a few mechanics double-checking that everything has been done correctly.

Self-proclaimed gearhead Michael Tougas, 14, a student from New York Mills, brings a lot of humor as well as muscle to the sessions. He first heard about the car building in one of Father Kuhn’s homilies.

“I try to show up every day the build is happening,” Michael Tougas said. “I like just being here. I’ve done some brake work, helped get the motor in. Mostly I just try to watch and learn.” 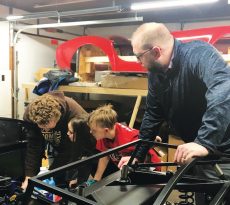 “It really gives the kids something to look forward to,” Stephen said. “They just love coming here. Father is so good to include them in everything. He’s not only building a car, he’s building a community.”

The Tougases are already looking ahead to the next project. But for now, they are most excited to see this car take its first spin.

“I can’t wait to see Father back it out of the garage and drive it around the block for the first time,” Stephen said. “The smile on his face will be amazing.”

For each hour volunteers helped on the project, they could cast one vote for the final paint colors. The winning colors? The body will be bright white with two blue rally stripes representing St. Teresa of Calcutta’s white habit with blue stripes.

Father Kuhn estimates that more than 300 hours of labor will have been put into the build by its completion. He hopes the effort will reach three tiers of profitability: 1) to pay off any outstanding debt; 2) to raise funds for those discerning vocations; and 3) to raise enough money to purchase another kit.

He also identified four major benefits to the build: “The first is raising money and awareness for vocations; the second is getting dads and sons, moms and daughters, to come in and help out. They benefit from the bonding process. It is so cool to watch parents being patient and kind. The third is I get to learn how to work on cars because I’ve always wanted to but never really had the opportunity. The fourth is evangelization — there’s a lot of people in town talking about it.”

Mostly, he is hopeful for how this build might impact the whole diocese and beyond by furthering vocations to the priesthood and religious life.