For years, Stephen F. Auth, his wife Evelyn Auth and Father Shawn Aaron, a member of the Legionaries of Christ, have guided informal tours of the Metropolitan Museum of Art in New York to share their knowledge of the Christian themes replete in many of the works of art there. When the COVID pandemic made in-person visits impossible, Auth decided to write a detailed guide, and this book is the happy result.

“Pilgrimage to the Museum” is a richly illustrated odyssey through classic Western art over the centuries, refracted through the prism of Auth’s deep Catholic spirituality. He begins in ancient Egypt with the tomb of Perneb, moves on to ancient Greece and Rome, then visits Middle Ages Europe, the Renaissance and the Enlightenment and beyond, all the way to abstract impressionism’s Jackson Pollock and surrealism’s Salvador Dali.

Whether discussing a famous or a lesser-known work of art, Auth invariably shows us how much of the Western canon expresses humankind’s eternal search for the divine. Auth, whose Wall Street career is extensive, is a member of the Regnum Christi movement. His writing throughout is lively and colloquial, informative but never pedantic.

Here’s how he sums up the religious viewpoint of the ancients: Egyptians emphasized “men as gods,” while the Greeks favored “God as men” and the Romans, “there is no God.” In other words, the Egyptians, without benefit of God’s revelations to the later Hebrews and Christians, gave a godlike status to Perneb and others of the wealthy class. Yet in doing this, Auth writes, the ancient Egyptians “were clearly longing for, seeking, a relationship with their Creator, seeking eternity.”

Subsequently, in their art the ancient Greeks celebrated “gods as men, or perfection on earth,” while the Romans focused on this world, “the here and now, rather than on the eternal or the perfect,” Auth explains.

“Unlike the two-dimensional abstract figures in ancient Egyptian art,” he says, “the people in Roman art are three-dimensional solid figures. And they are real-life representation portraits, not idealized forms, as in ancient Greek art. They depict life in the present, showing little focus at all on something greater, something eternal.” 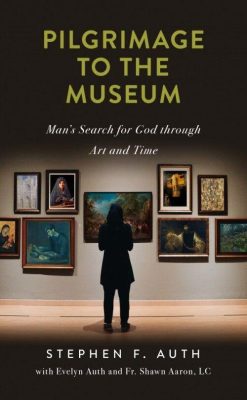 His discussion of “The Intercession of Christ and the Virgin” by Piero di Giovanni (called “Lorenzo Monaco”), painted before 1402, is captivating. At first, “The Intercession” seems to be a characteristically late-Gothic painting. But look more closely, and you see a group of penitents who are rendered much smaller than the larger figures of Jesus, God and Mary. And “they are individualized, with special little features that suggest these figures are portraits of real people,” most likely the wealthy patrons who sponsored the painting.

What a contrast, Auth observes, with the tomb of Perneb! This elite member of the pharaoh’s court had the artist exaggerate his size, making “him bigger than life, as a god in the afterlife to be adored and waited upon by scores of ‘little people,’ just as he was on earth.” But in “The Intercession,” the sinners, though wealthy, are comparatively reduced in stature, just like all humanity, humbly praying for divine mercy.

Auth includes a few examples housed outside the Met, among them Giuseppe Sanmartino’s “Veiled Christ” (1753) in Naples, Italy. This marble sculpture of the dead Savior, whose features and wounds can be viewed through the delicately rendered burial shroud, shows a “countenance of peaceful confidence (that) reminds us that this is not the end.”

The resurrection is at hand, when Christ will arise through the veil. To Auth, the veil symbolizes that “God is a mystery, one we can never fully contemplate.” Appropriately, he quotes St. Paul: “At present, we see indistinctly, as in a mirror” (1 Corinthians 13:12).

Occasionally Auth engagingly dramatizes the give-and-take between tour guide and visitor. He’s not surprised, he writes, when attention wanes in front of Jackson Pollock’s “Autumn Rhythm (Number 30),” 1950. “‘Well, even I could have done this,’ says someone in the back of the group.”

But Auth’s knowledgeable commentary quickly dispels this common notion. “Autumn Rhythm” is much more complex than you think. Pollock’s swirls of paint, mostly black and white, may evoke “a battle of light and darkness playing out in Pollock’s mind.”

“And what of those little splashes of green within the chaos?” Could they be “signs of life, peeking through”? Ultimately, Auth views “Autumn Rhythm” as a statement of the kind of chaos that comes when we let our belief in God fade away.

Fittingly, Auth ends this fascinating journey with an explication of Salvador Dali’s “Crucifixion (Corpus Hypercubus),” 1954. He shows how this surrealist painting’s image of pure divine love “seems the perfect antidote to the dark themes of the 1800s and 1900s.”

“Pilgrimage to the Museum” will reward a wide audience, especially those who have little or no art history training but a desire to better understand how art in every age has been sparked by the desire to know God.

Nancy L. Roberts is a journalism professor at the State University of New York at Albany who has written/co-edited two books about Dorothy Day and the Catholic Worker.